Sunkist and the Orange Blossom Special

Just from looking at the designs on the handles of these three fruit spoons, you would think they were all manufactured by the same company:

The pattern in the center appears to feature all oranges while the other two incorporate lemons as well. 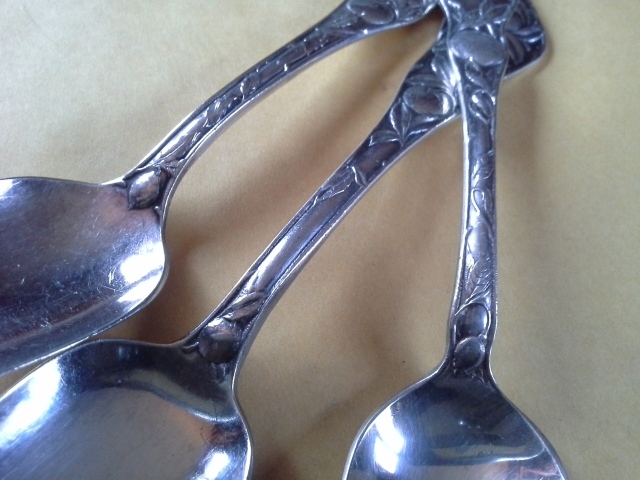 Fruit at Bottom of Handle as Well

But, the fact is, the center spoon was made by William Rogers & Son and the other two were made by Oneida Community.

Backstamps for Wm. Rogers and O.C.

I believe this pattern was offered for a brief time by Sunkist as a premium, although I have not been able to find any advertising to support this belief.  The following was taken from Wikipedia:

“In an effort to distinguish Sunkist oranges from others, the CFGE (California Fruit Growers Exchange) wrapped its oranges in paper stamped with the Sunkist brand. But in 1909, after Sunkist learned that merchants were selling non-Sunkist oranges as Sunkist, it began to offer consumers a free Sunkist-branded spoon in exchange for mailing in twelve Sunkist wrappers. One million spoons were claimed in the first year of the promotion, further establishing the brand in consumers’ minds and giving merchants a reason to want to display Sunkist oranges in their original wrappers. By 1910, the promotion had resulted in Sunkist becoming the world’s largest purchaser of cutlery.”

At first, this floral pattern was simply referred to as the “Sunkist Design”: 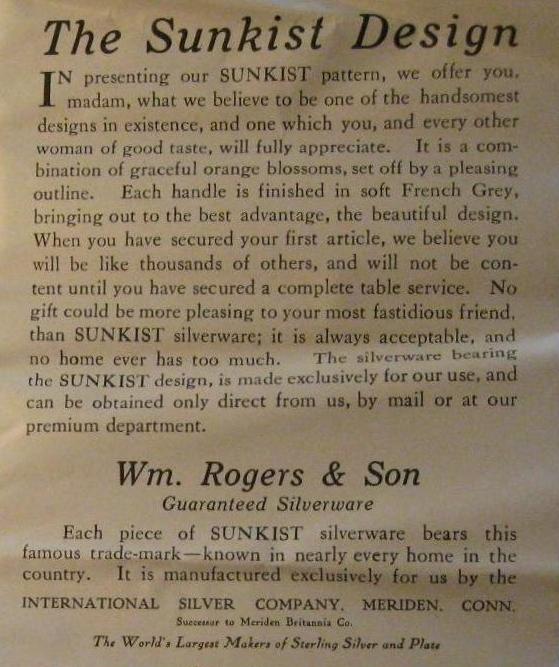 The wording above was taken from a pamphlet issued by Sunkist.  You’ll note that they refer to the “graceful orange blossoms” within the Sunkist Design.  They also state “you will not be content until you have obtained a complete table service”. 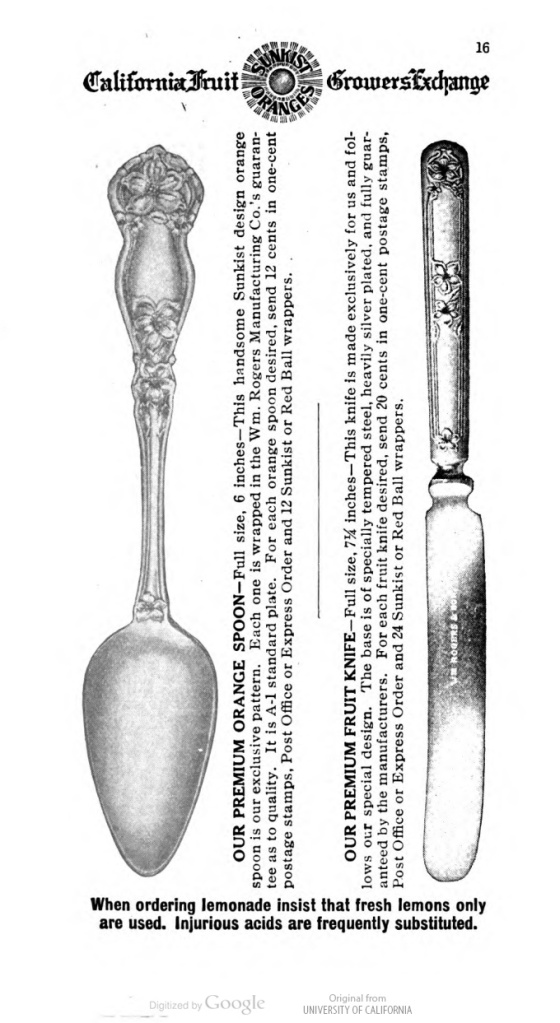 The Montreal Gazette ran a Sunkist ad in a May 1912 issue of their newspaper and the following was part of that ad.  You will note that it reads “Genuine Rogers and of the latest style” which indicates that this floral design replaced the original orange design.  This ad also lists fourteen different flatware pieces offered in this new pattern.

1912 Issue of The Montreal Gazette

The following quote was taken from a 1914 California Fruit Growers Exchange circular:  “…people all over the country the last year have been calling for “Sunkist” fruit, because they know that the word stands for something.  On the wrap is printed, “Twelve of these wraps and 20 cents in stamps sent to our Chicago office will secure a premium spoon.  The spoon is of neat design that any woman would pay from 60 to 75 cents for.”

By 1915, a full line of 46 different pieces was being offered in this floral pattern.  However, at this point in time they are no longer referred to the Sunkist Design nor are they referring to it by any other name: 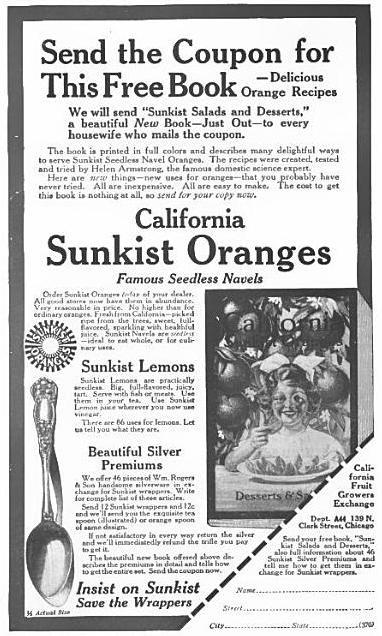 Later, however, the following 1915 ad does mention “exclusive Orange Blossom design” and shows all the flatware and hollowware pieces offered:

So by 1915, this new floral design has been named “Orange Blossom” and is being offered as a full service set.  It makes sense that the original “orange” design was dropped and the floral “Orange Blossom” pattern was adopted if they wanted to expand their offering to a full service set…who would want their entire table set with a simple orange design?  It certainly is suitable for a fruit spoon but not to serve lamb stew, do you know what I mean?

Patents run for a period of seven years.  In 1917 the original orange design of Gustave Strohhaker was not renewed: 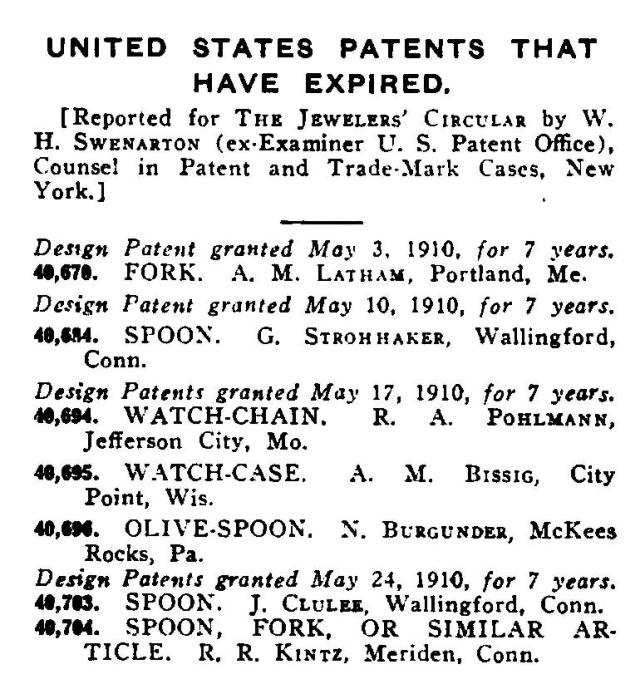 Perhaps it was at this point that Oneida Community picked up on this expired patent design and offered two variations of it as fruit spoons.  I do not see that they ever applied for a patent for these variations.  I have seen these Oneida Community designs referred to as “Orange”, however in Davis and Deibel’s “Silver Plated Flatware Patterns”, they call the narrower handle variation “Oneida Community Three” and don’t show the other variation at all.  And one other interesting tidbit, I have never seen Oneida Community use that “O.C” mark on any other design.  I don’t know if these “O.C.” fruit spoons were offered as premiums; I haven’t seen evidence that they were.

Personally, I love the Oneida Community designs.  The detail is exquisite, the spoons are well made and of heavy weight.  If you are an orange / fruit spoon aficionado, all three of these patterns, the two Oneida Community and the one Wm. Rogers & Son, would make a lovely addition to your collection.  Keep in mind that the Wm. Rogers orange spoon was only offered for a limited period of time, so although many of them were sold as premiums, they are still somewhat on the rare side.

These three spoons are available for sale at my Etsy shop:  https://www.etsy.com/listing/191597918/three-variations-of-silverplate-orange

7 Responses to Sunkist and the Orange Blossom Special