Posted on January 1, 2019 by queenofsienna

I knew nothing about the Quaker Silver Company until I came in the possession of a 12 inch long sterling silver cocktail stirrer. The back of the very shallow round bowl had hallmarks which were a “Q” and a crown symbol followed by some other symbol which I could not decipher. 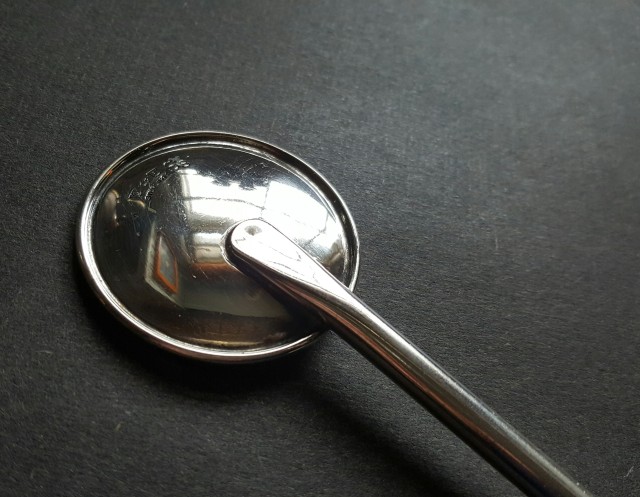 The finial at the other end looked like this:

Researching the “Q” and crown symbol hallmarks, I found that the series of marks on my stirrer belonged to the Quaker Silver Co. of North Attleborough, Massachusetts. Now I needed to find out their history.  And it turned out to be a little complicated. (So what else is new?)  I think the best way to explain it is by tackling it chronologically. Following is a compilation of snippets tracing the origins of Quaker Silver back to the year 1924 and the Williams & Green Co. of Providence, RI.  Harold K. Green was one of the principals of this company.  For some reason unknown to me, the Quaker Silver Co. of Attleboro, MA was incorporated in 1926 for the purpose of taking over the business of Williams & Green.  Harold K. Green was president and sales manager of the new company.  James W. Jennings, who was treasurer and general manager of the old company assumed the same positions in the new. 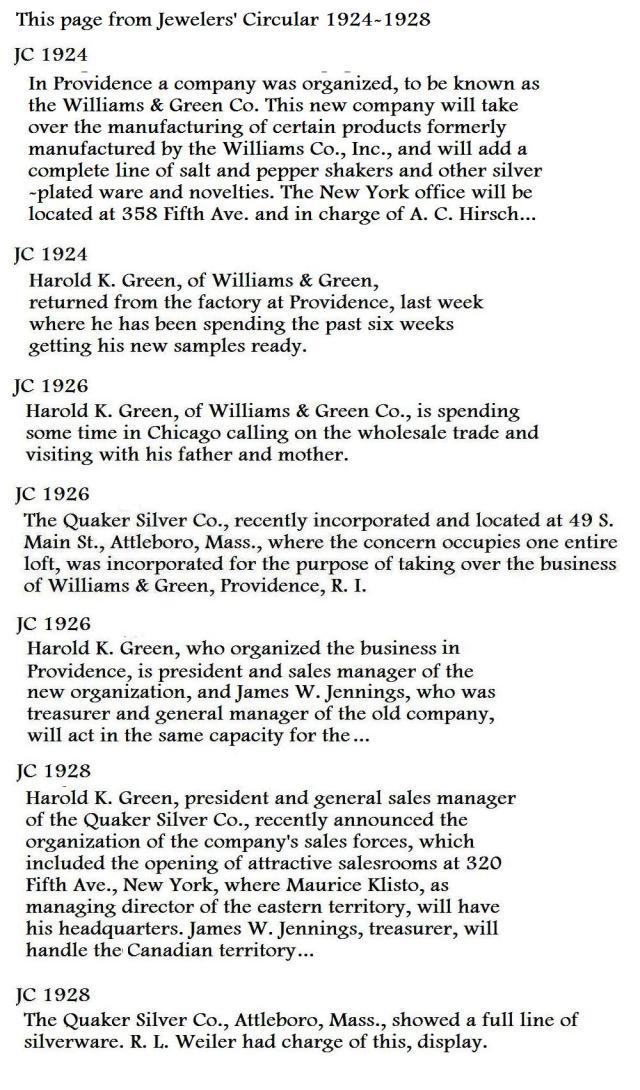 In 1927 Mr. Green and Mr. Jennings obtained a patent for a vase, which follows.

In 1930 Quaker Silver obtained a trademark featuring the face of a woman with a bonnet, a “Quaker Girl” I would call her. It mentions that this trademark had been in use since February 1926.  The following image also shows the Quaker Silver mark used on their sterling pieces.  And lastly, a 1931 ad mentioning pewter products offered by them, including cocktail shakers. 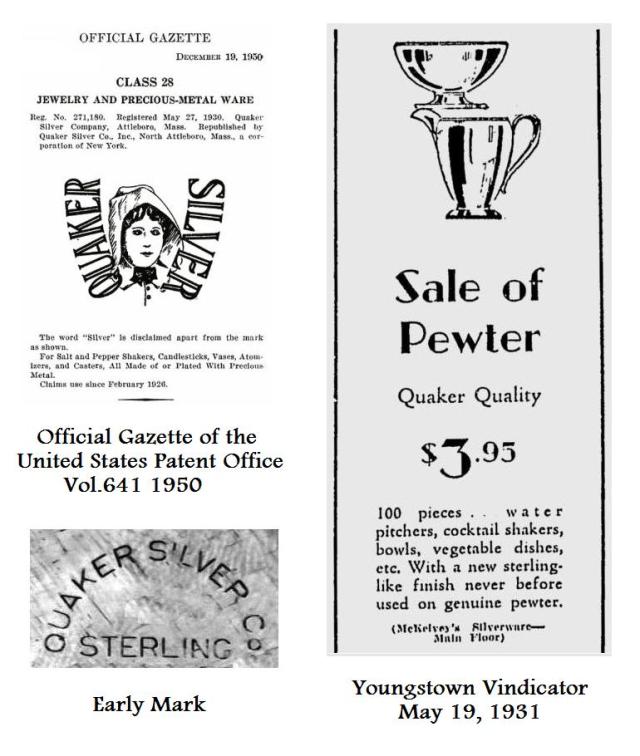 In 1929, James W. Jennings met by chance a young woman named Belle Kogan who was just starting in the field of art and design as well as working in her father’s jewelry store in New York City.  A most popular product of Quaker Silver were salt and pepper shakers, many of which Belle had sold at here father’s store. Ms. Kogan was invited to Attleboro to visit.  She was hired as a designer for the company. The “Mr. Stone” mentioned in the snippet at the top of the following image is Samuel M. Stone, well known for various jewelry related companies, included the famous “SWANK” men’s line of jewelry.

But, by 1936, Quaker Silver Co. had gone out of business (see following snippet from court documents): 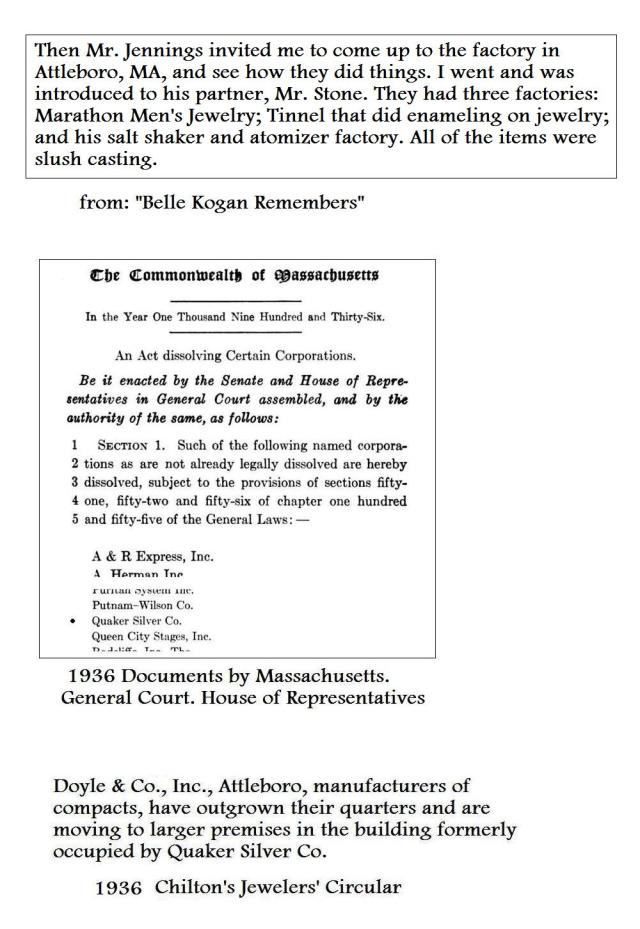 In 1939, however, the name Quaker Silver Co. had been “revived” by James W. Jennings (president and treasurer) and the company was established in North Attleborough, MA.  Note: Some people spell this North Attleboro and some spell it with the “ugh” at the end.  The Quaker Silver Co. trademark (first used September 28, 1939) is shown below as well. This is the mark on my stirrer.

Following is an image from a 1950 Chilton’s Jewelers’ Circular showing a “Windsor Bowl” in sterling (mentioned above as well). 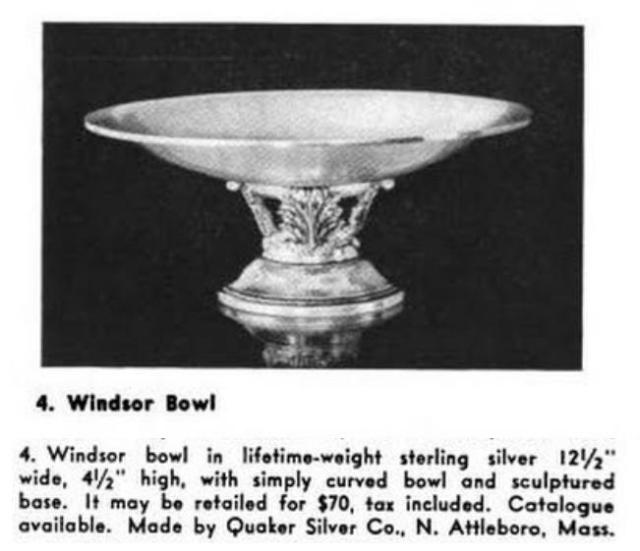 So, what happened to Belle Kogan, you may ask.  According to the following snippets from 1939 publications, she was designing for Quaker again when the new company opened.  And it was reported in a 1951 issue of Modern Plastics, that she had her own studio and was co-owner of Quaker Silver Co.

The following article from a 1959 issue of the Spokane Daily Chronicle states that “she (Belle) and her father bought the firm (Quaker) and moved it to North Atttleboro.”

Ethel Lewis, in her 1942 book “Decorating the Home” shows a table set with silver designed by Belle Kogan for the Quaker Silver Co.  With the exception of my cocktail stirrer, I have not found any flatware attributed to the Quaker Silver Co. If any of you reading this know of flatware manufactured by this firm, I’d love to hear from you.

The October 17, 1959 Meriden Record reports that the Quaker  Silver Co. had been acquired by Gorham Manufacturing.

So there you have it, the tale of two Quaker Silver Cos. I have a feeling that my cocktail stirrer was designed by the first famous female industrial designer, Belle Kogan!