I’ve envisioned antique julep strainers being used at fashionable bars in the Gay ’90s, or in a dark speakeasy during Prohibition, and later, perhaps, by Nick Charles as he poured martinis for Nora and himself.  But I didn’t envision a julep strainer being used in some saloon in the wild west.  I guess I thought those cowboys, gunslingers and other sorts were ordering shots of whisky or a shot and a beer or something similar.

Then I came across a julep strainer with no mark other than “J. K. Basye”. 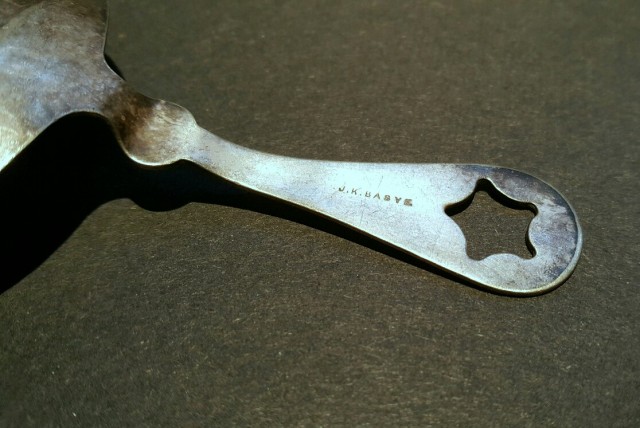 The strainer had a large star cut-out in the handle.  It was tarnished and showed some wear.

The star and the shape and placement of the holes were the same as shown in the 1883 Derby Silver Co. catalog (image follows).  Derby changed that design several years later. 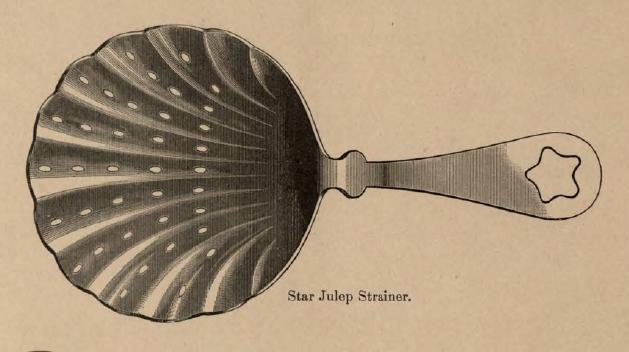 Those of you who follow this blog know I love a good mystery and I immediately began my search to discover who J. K. Basye was.

The first thing that came to light was an article mentioning a watch which had belonged to a Colonel Potter being pawned at J. K. Basye’s shop in Albuquerque, New Mexico. The article date was in November of 1880.  Colonel Charles Potter was the stepson of Rhode Island Governor Charles Van Zandt.  Potter was a surveyor for the U. S. Geological Survey.  He went missing in the canyons outside of Albuquerque in October 1880 and his watch turned up at J. K. Basye’s jewelry store the following month.  It was later discovered by Sheriff Perfecto Armijo that Potter had been murdered by a band of outlaws.

In 1880, Basye was located in what is now known as Old Albuquerque.

He moved to New Albuquerque (built to take advantage of the new train route) in 1881.  Following are some articles and advertisements related to Basye’s store.

Albuquerque was a rough and tumble town back then.  Saloons were many and included the Bon Ton Saloon, The Elite, The White House, Fat Charlie’s Retreat, Marble Hall, The Boss Saloon, Railroad Palace Saloon and Zeiger’s Metropolitan Saloon.  Following is a photo of the Metropolitan on the corner of 1st and Railroad:

What surprised me was the fact that bartenders back then were called mixologists. Here are two articles from the Albuquerque Journal mentioning mixologists. The first describes mixologists behaving badly.  The second mentions a mixologist doing “the Tom and Jerry act”.  For those of you unfamiliar with the term, Tom and Jerry is a sort of eggnog.

In April of 1882, Wyatt Earp and Doc Holliday spent a few days in Albuquerque.  The two men had their famous “falling out” there at the Retreat Restaurant.  Here is a picture of Wyatt:

Albuquerque was growing by leaps and bounds and by 1886, this is what it looked like (the red dot shows where the Metropolitan Saloon was. Basye’s store was just up the street a bit):

J. K. Basye left Albuquerque sometime between 1888 and 1890, next showing up in Seattle.  The following excerpt came from a publication on the Basye Family history. It is interesting that Albuquerque isn’t mentioned.  He would have been only in his mid 20s when he first went into business in Albuquerque.

If any family members are interested, I do have more info on James K. Basye. Please ask.

So, this julep strainer has quite an interesting history.  It could have been in a smash or julep served to Wyatt or Doc.  I’d love to know who actually owned it.  Maybe it was James Basye’s own personal julep strainer.

It is available for sale here at my Etsy shop: https://www.etsy.com/listing/587973102/j-k-basye-silver-plate-star-julep