Curious Story of a Strainer

Posted on February 15, 2018 by queenofsienna

I came to acquire a julep strainer with “Central Park Garden” on the handle.

The handle is back-tipped with a star cut-out and no maker’s mark.

Never having heard of the Central Park Garden, I started my research.  It turns out that it was a restaurant and entertainment complex on Seventh Avenue between 58th and 59th Streets.  Looking for an image, I found the following: 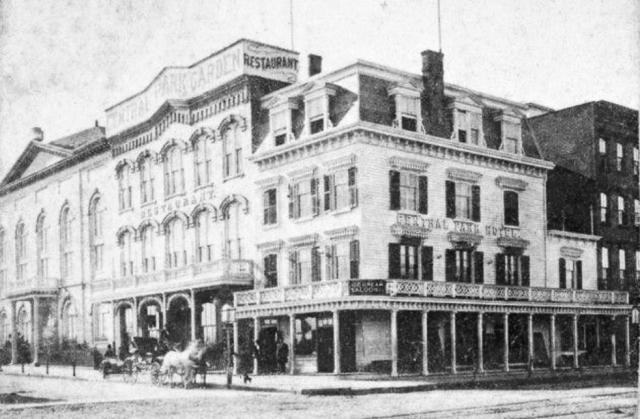 The building right on the corner has a sign “Central Park Hotel”. Next to it is the Central Park Garden (sign on top) Restaurant (sign above the second floor windows). I was curious about the hotel.  Was the hotel connected with the restaurant?  I searched New York City directories and found that the hotel was listed in an 1859 directory. 1859! Wasn’t that about the time that Central Park was being planned by Frederick Law Olmsted?  Searching Central Park I found that the park was established in 1857 and Olmsted  and Calvert Vaux won a design competition to improve and expand the park in 1858.  The park’s first area was opened to the public in the winter of 1858.

Whoever owned that hotel must have been pretty smart as the City Directory was published in 1859 but the information for it was gathered the preceding year.  (How on earth did they do that back then? Have you ever seen one of these directories?  Hundred and hundreds of pages of information all in tiny little print.)

So, it turns out that the owner of the hotel was Hermann Knubel.  The City of New York had acquired some of Hermann Knubel’s land for Central Park.  So Mr. Knubel had apparent advance knowledge and quickly put that knowledge to work.  Central Park was directly across from his hotel and the Broadway and Seventh Avenue train terminus was nearby. The photo below was taken from the train tracks.

Central Park Garden (900 Seventh Avenue), I learned, opened in May of 1868.  It was built as a permanent home for the famous Theodore Thomas Orchestra. In addition to the restaurant, there was an open air auditorium and beer garden.

Following is an 1872 article describing Central Park Garden and Thomas’ concerts. Note in the second paragraph where it says “Refreshments and liquors of all kinds are sold to the guests; but the prices are high”.  Keep in mind this post is about that julep strainer.

The following illustration was in the February 1875 issue of Scribners Monthly:

The Theodore Thomas Orchestra’s final season opened at the Central Park Garden on May 17, 1875.  After that it was used for various sporting events, including boxing, wrestling and walking matches (also called competitive pedestrian matches).  It reopened in 1877 as “Central Park Garden and Hart’s Summer Theatre”. 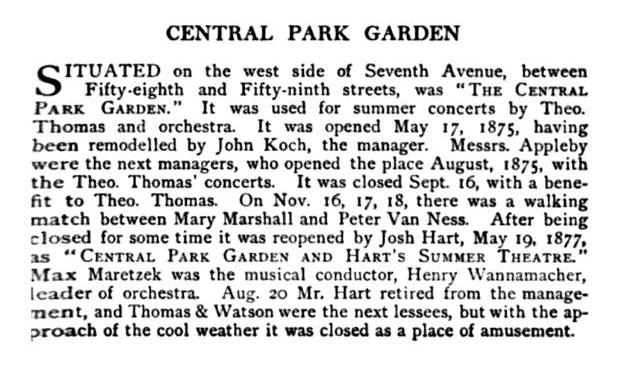 Note that the following article mentions that the property was converted to a riding academy in 1878.

The following article was published in 1878 by the New York Times.  It describes a court case involving Warren Soule who had taken a loan and used the furniture and silverware of Central Park Garden as collateral, claiming that he owned these items. However, the furniture and silverware were actually owned by Leonard Appleby. Mr. Soule, unable to pay the loan, was arrested.

Although not mentioned in this New York Times article, court documents show that Mr. Soule took the furniture and silverware under cover of night sometime before June 16, 1876 and sold them (to whom, I do not know).  And this is where the julep strainer comes in.  The strainer was apparently part of the stolen loot!  Talk about a history! 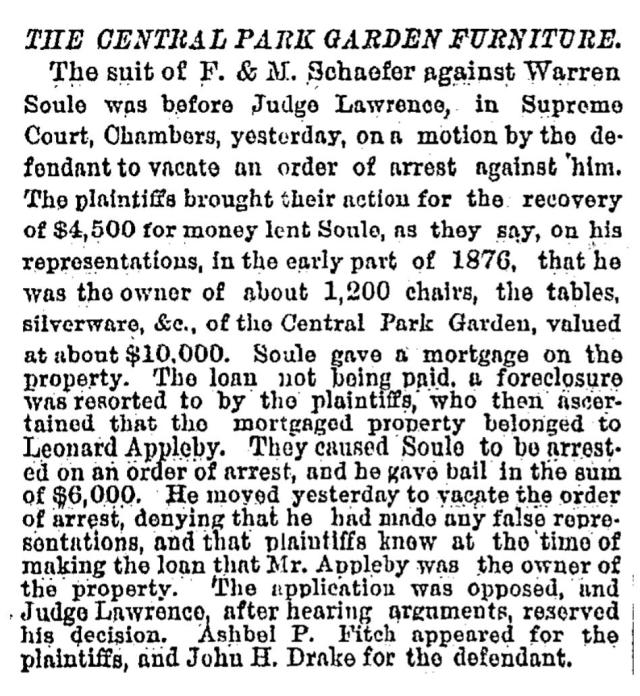 Following are a couple pages from that court case I mentioned.  A more complete listing of the items used as collateral by Soule is included. 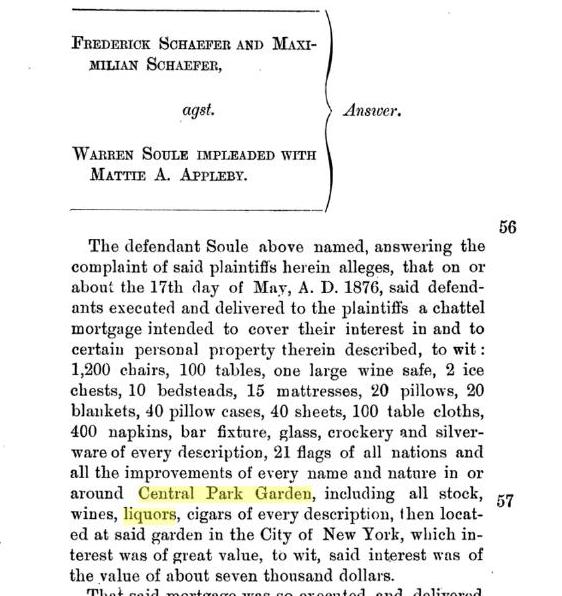 And note at the very bottom of the next page it states that “Soule carried off in the night…almost the entire stock” of the Central Park Garden.

And this article describes the demise of the Central Park Riding Academy. The property was converted to a theater complex.

This julep strainer is available for sale at my Etsy shop. https://www.etsy.com/listing/579596436/central-park-garden-nyc-silver-plated

The second half of the nineteenth century seems to have been an interesting time. The following article discusses what some working class women did to pass the time.

And I just wanted to add the following which provides a further discussion of the Central Park Garden.

This was written by Theo Thomas’ daughter.

3 Responses to Curious Story of a Strainer