The following image is of what appears to be an early tin cocktail mixer and strainer. 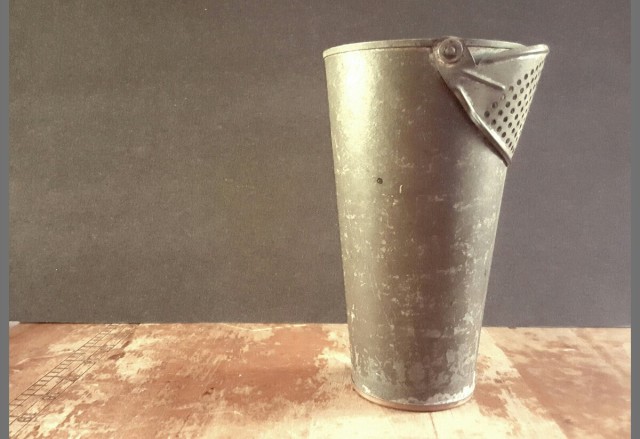 It stands about 6 and 1/2 inches tall with the strainer in the down position.  It has a copper bottom. And it has no maker’s mark.  No hint whatsoever as to who made it.

In looking through my cocktail strainer pictures and patents, I came across one that was very similar, a September 26, 1882 patent by Thomas Miller, No. 265,126. 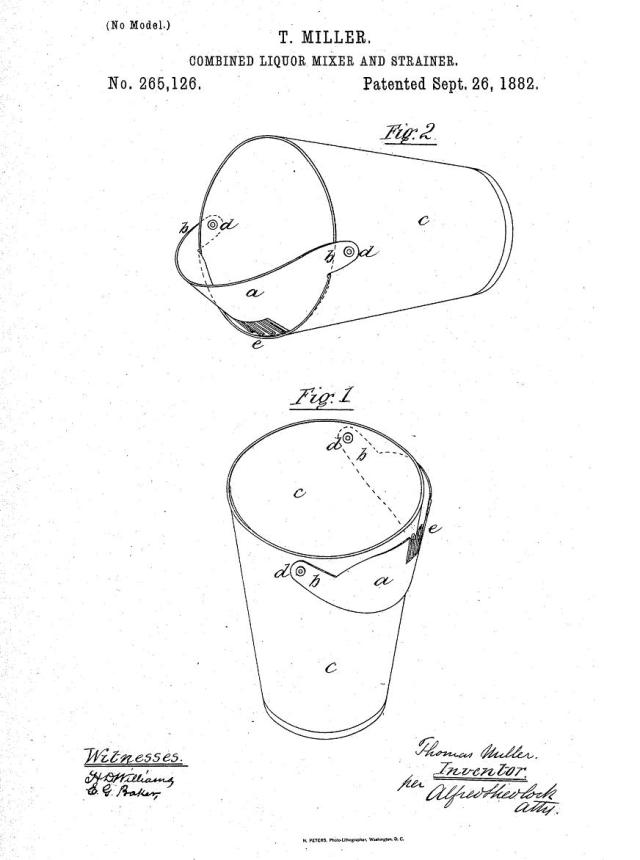 The strainer cut out was different but otherwise, to me, it looked the same.

I zeroed in on the paragraph from the patent detail that discussed the opening or perforations of the strainer “which may consist of one large opening, having a corrugated wire soldered in it, as shown, or consist of several smaller openings made through it, or one long narrow opening in its edge to form a slit in conjunction with the edge of the mixer.”  I took this to mean there could be variations in the strainer design.

But who was Thomas Miller?  The patent description said he was a subject of the Queen of Great Britain and resided in Jersey City, New Jersey.  My search began. 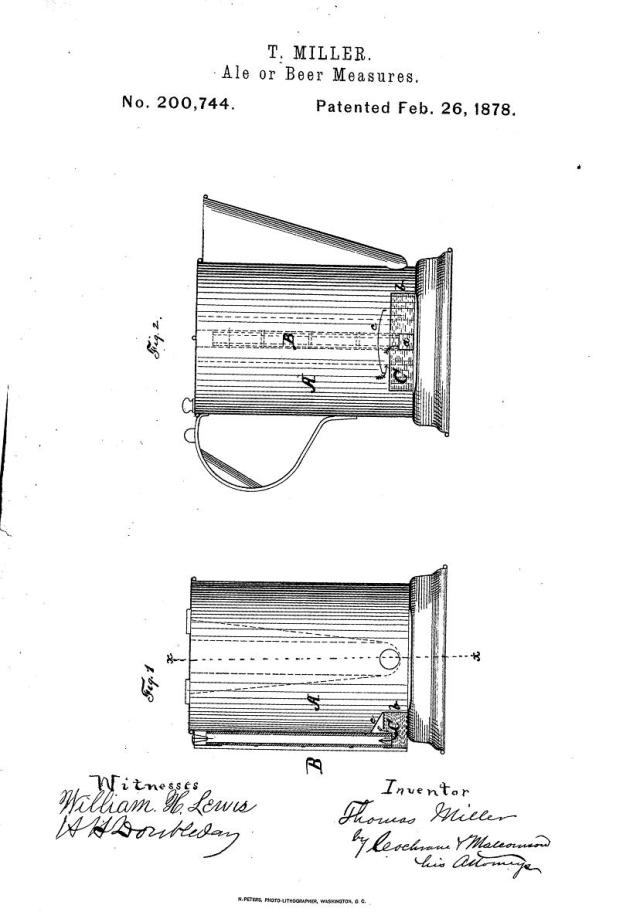 Although this beer measure patent predated the one for the liquor mixer by four years, he didn’t mention anything about the Queen.  But he was living in Jersey City at that time as well.

An example of Miller’s beer measure was found at the Hagley Museum and Library in Delaware: 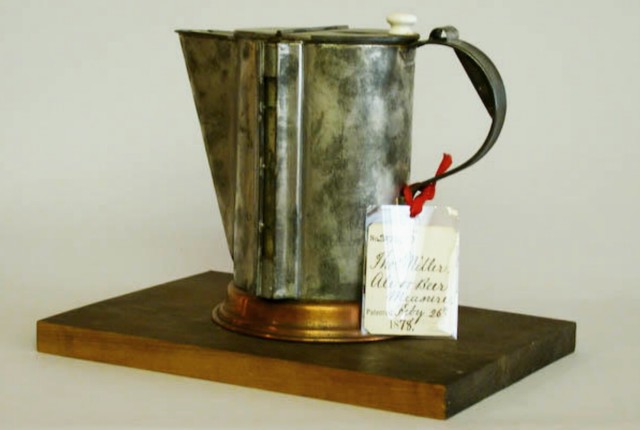 I noticed the description called this an “improvement” in ale or beer measures.  Why were they measuring beer back then?  I have to admit that I’ve never done much research on beer related patents or items.  Cocktails are more up my alley. So I had to take a little side trip and find out what was going on with beer measures back then.  And I found that people were taking pails of beer home from the saloons….beer to go.  So if you go into the bar and ask for a pint to go, it would make sense that the pint would be measured.  Additional research shows that that was not always the case, but at least now I understood the need for a beer measure.  And, being the babe in the woods as far as all things beer is concerned, I also learned that these take out pails were called growlers.  They frequently had tops on them and the frothy beer inside seemed to make a growling noise, or so it was reported.  I also learned that children were often sent to the bar to pick up the beer and bring it home.

Growlers are still very popular today.  How did I live so long without knowing that!!!  Can you use a growler to get a martini to go?  Pint of martinis to go, please. 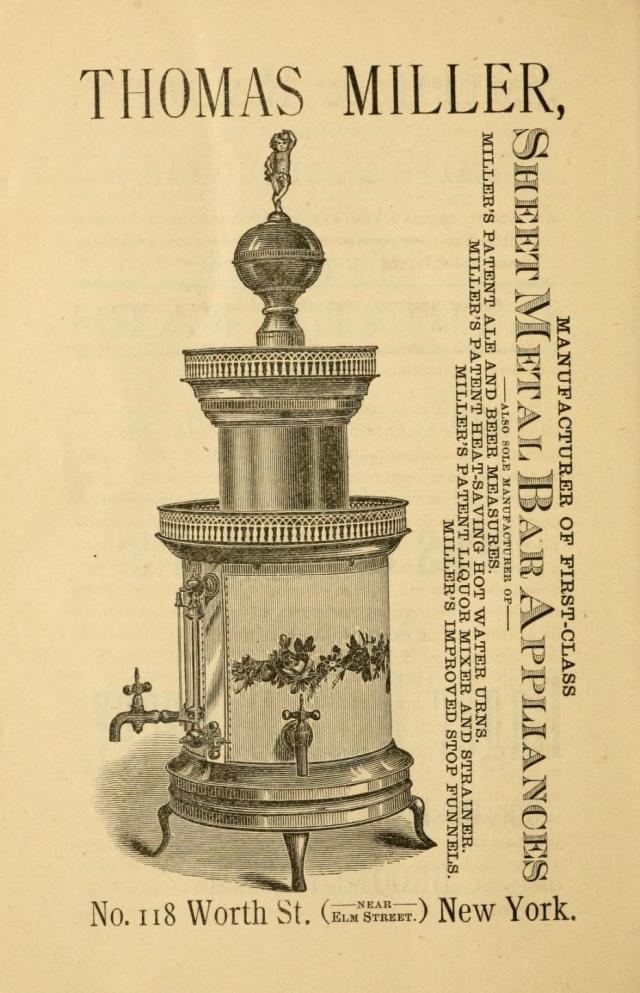 The impressive ad shown above comes from a George Winters 1884 book, “How to Mix Drinks”.  It shows the Thomas Miller has a business address at 118 Worth St, New York.  He lived in Jersey City and worked in New York City.  How did he commute?  My mind seems to wander off sometimes.  But, really, how did he commute?  Well, the answer is, he took the ferry.  He could drive his carriage right onto a ferry at the docks of Jersey City, cross the Hudson, and be in lower Manhattan a few minutes later.

The above illustration dates to 1883 and shows the boat traffic and ferries near the Jersey City port.

Following are more images of patents produced by Thomas Miller in 1892.

Following is a portion of a page from an 1884 B. A. Stevens catalog. It includes Miller’s Combination Lemonade Shaker and Strainer (remember, this is the period when the Temperance Movement was in full swing).  The Miller shaker came in small and large in both “planished tin” with copper bottom and “composition metal”, nickel plated with copper bottom.  The large size was 6 and 1/2 inches tall, the same size as my tin shaker.  The strainer openings, however, were the same slotted type as shown in the patent.

Although B. A. Stevens credited Miller for the shaker, the “Pat. Combination Lemonade Shaker and Strainer” at the bottom of the page appears to be the Edward J. Hauck strainer, patented June 24, 1884, No. 300,867, and the Hauck name does not appear.

I looked up the definition of “planish” and found: “flatten (sheet metal) with a smooth-faced hammer or between rollers”.

The next illustration shows a page from an L. & M. Goodsticker catalog circa 1890. The Miller and Hauck strainers are referred to as ” milk punch shakers”.

And the following came from the same Goodsticker catalog. It includes various measures including the Miller measure. 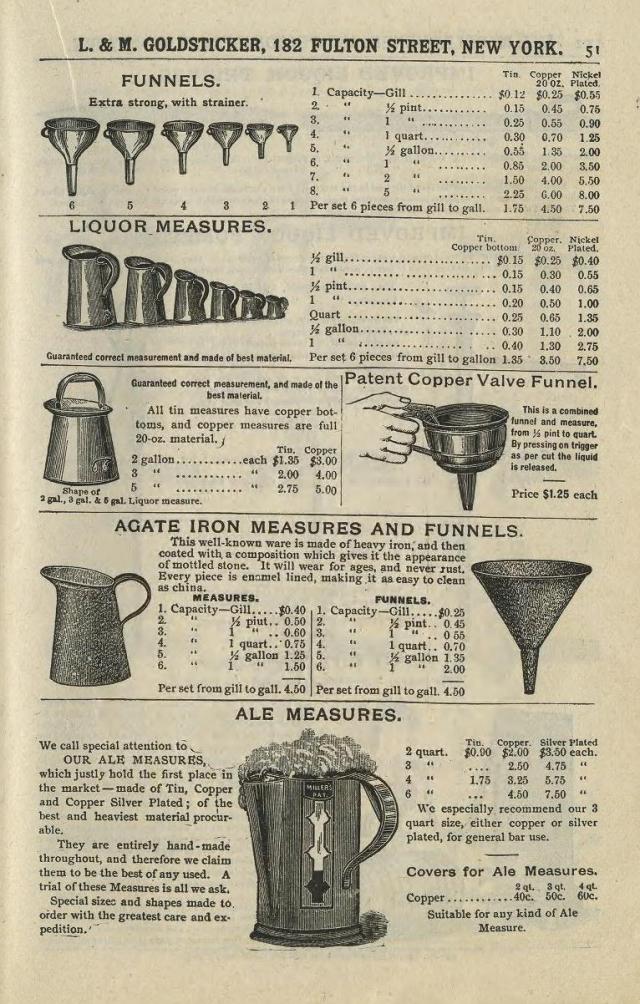 Trying to stick to a chronological listing of images, the following came from the April 5, 1894 issue of “The Iron Age”:

The following images come from a Budde & Westermann catalog dating to circa 1895. What appears to be both the Miller shaker and beer measure are shown. It also appears that the Hauck strainer is included although neither the Miller nor Hauck names are mentioned.

There was not much to be found between 1894 and 1907, the date of the Bruce & West Manufacturing Co. catalog from which this page came:

The lower right of the page above shows an image of what looks to be similar to the Miller shaker.  It is offered in spun brass, nickel plated and planished tin, copper bottom.  Of note, the straining slots are more spread out than in the patent illustration. Following is an enlargement of this section: 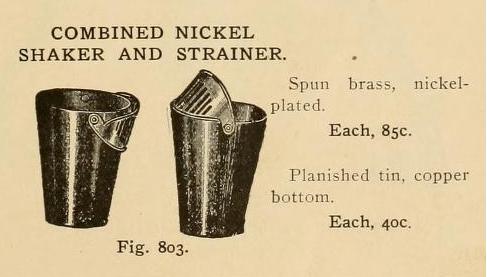 Sean Hubert of Portland (Etsy shop StumptownAntiques) was kind enough to provide the following two photos.  It’s wonderful to see these two strainers side by side, the plated with the T. Miller mark, next to the tin:

A close-up of the mark: 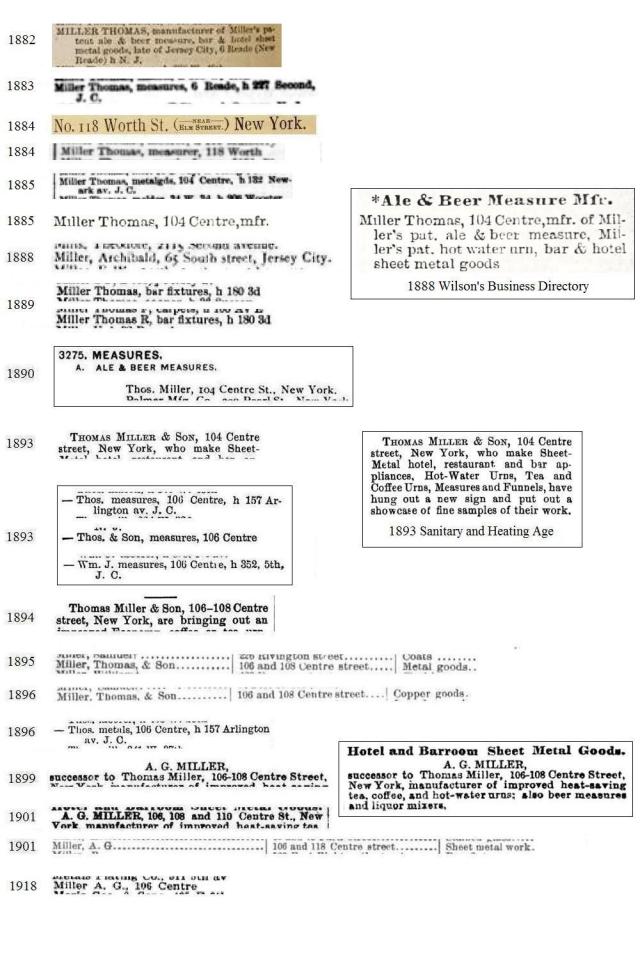 The question remains, did Thomas Miller actually make the copper bottomed tin mixer / strainer?  If not, who did?  And which one came first if they were not made during the same time period?

If anyone has info they can share, I’d be delighted to hear from you.

The tin mixer / strainer shown in the first photo is available here at my Etsy shop: