Posted on September 25, 2014 by queenofsienna

I’ve been kind of obsessed with oyster forks lately, most likely as a result of my earlier post “Aw Shucks…It’s an Oyster Obsession”.  I’ve found a couple of Gorham forks which are rather interesting, to me at least.  What I find fascinating about the following two forks is that they were made about the same period of time (so I believe).

The uppermost fork is sleek, clean, contemporary, modernistic.  Although I cannot determine the pattern, my research indicates that it was made in the late 1880s, perhaps for Delmonico’s restaurant.  The other fork is in the “Saxony” pattern, designed by George Wilkinson and patented in 1891.  I would expect this Saxony design to have been manufactured in 1891, but the other…no way.  Ah, such is the fun of collecting silverplate! But what was that crest on the front of the handle of the Saxony fork?

Crest on Handle of Saxony Fork

And what did the names on the back of the handle signify, “H. M. Kinsley & Baumann”? 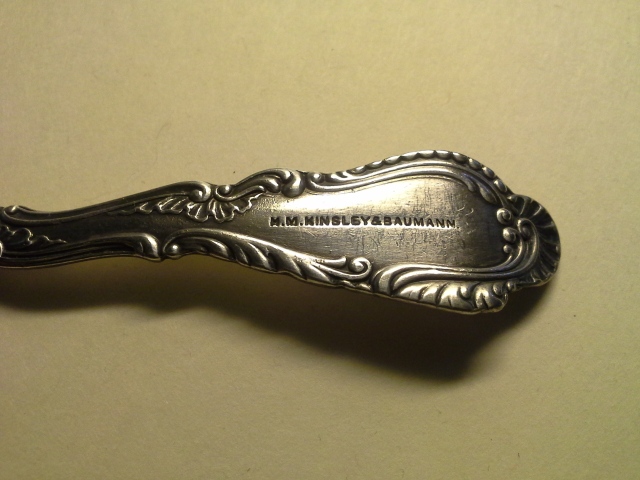 Actually, unlike a good deal of my research, this information was relatively easy to track down.  Herbert M. Kinsley and one of his sons-in-law, Gustav Baumann, owned the Holland House hotel which opened in New York City at the corner of 5th Avenue and 30th Street in 1891 (same year the Saxony pattern was patented). Gustav Baumann, Gustav Baumann, gee that name sounded so familiar.  And then it hit me, Gustav Baumann later went on to establish the Biltmore Hotel in New York City.  I wrote a blog a while back “I’m In Love With Jack” about Gustav Baumann and his associate Jack Bowman (the Jack in the blog title).  Weird how one blog (oyster forks) leads me to an earlier blog (Jack). So, research shows that Herbert Kinsley was a successful caterer and restauranteur in Chicago before he came to New York and opened the Holland House along with his son-in-law, Gustav.  (Note:  Herbert Kinsley wrote a book entitled “One Hundred Recipes for the Chafing Dish” which was published by Gorham.  This book is for sale at my Etsy shop here: https://www.etsy.com/listing/244930959/one-hundred-recipes-for-the-chafing-dish ). They gave their guests a 33 page booklet about the Holland House when the hotel opened.

Note that the crest on the front page looks similar to that on the oyster fork.

The Holland House was majestic in every way and was one of the finest hotels in the world at that time. 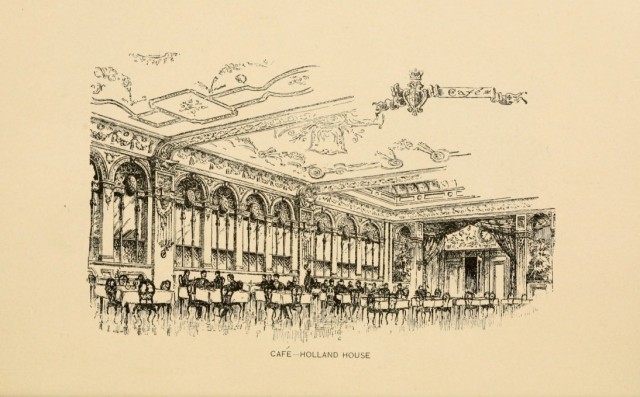 Herbert Kinsley died just three years later as a result of a surgical operation gone bad.   In 1911 Gustav retired from the hotel business but came out of retirement in 1914 to run the new Biltmore Hotel.  In October of 1914, he was reported to be making his daily inspection of the hotel when he fell to his death from a parapet.  His secretary, John Bowman, became general manager of the New York Biltmore upon Gustav’s death.  John “Jack” Bowman went on the build many more Biltmore hotels and had a very successful career in the hotel field.

The two oyster forks in the first photo and the Biltmore Hotel fork shown above are available for sale at my Etsy shop. https://www.etsy.com/shop/queenofsienna One last note….in 1894 Herbert Kinsley wrote a cookbook of chafing dish recipes which was published by Gorham.  Now I’m obsessed with chafing dishes.  More on that in another post!  Know you can’t wait.

5 Responses to The Holland House