Posted on February 23, 2014 by queenofsienna

I recently came across a small julep strainer (just over 4 inches in length as compared with an average sized julep strainer which is just shy of 6 inches) that was marked “Old Harper Whisky”…”whisky” without the “e”.

Research told me that Old Harper Whisky was a brand of Bernheim Distilling Co. of Louisville, Kentucky.  Isaac Wolfe Bernheim was born in Germany and emigrated to the United States in 1847, purportedly with only $4 in his pocket.  He had planned to work for a company in New York City but that company went bankrupt.  He became a traveling salesman (on horseback) selling housewares…but then his horse died.  He ended up in Paducah, Kentucky as a bookkeeper for a wholesale liquor company.

Isaac saved enough money to bring his brother, Bernard, over to the US from Germany and together, along with another friend as silent partner, opened Bernheim Brothers in 1872.

Bernheim Brothers had an exhibit at the 1893 Columbian Exposition which resembled a log cabin: 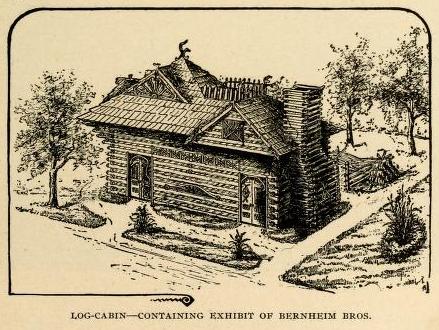 I know these Old Harper strainers were made in both the normal julep strainer size as well as the small size. Perhaps they were given as souvenirs at the 1893 Columbian Exposition.

They are available for sale here at my Etsy shop: https://www.etsy.com/listing/595728333/old-harper-whisky-silver-plated-julep

Julep strainers are not only a bar tool used in the preparation of beverages, they were also served bowl side up with an iced drink, such as a mint julep, to hold back the ice and mint while imbibed.

The toddy strainer shown below is photographed against an I. W. Harper advertisement which mentions both toddies and juleps.

And the next ad was taken from the November 1914 Pacific Wine Brewing & Spirits Review,  pg.35 (this ad made me laugh…Somebody’s Hurt…Get the Whiskey!):

The name “I. W. Harper” was trademarked July 3, 1905 by Bernheim Distilling Co.  I believe that the usage of “Old Harper Whisky” predates that 1905 date. The spelling of “Whisky” was changed to “Whiskey” somewhere around the turn of the century.

Bernheim Distilling used an acorn symbol on its letterhead and in some of their ads.  The February 25, 1890 Bonforts Wine & Spirit circular includes this:  “The unique design on the Bernheim Bros. & Uri Stationary, with its appropriate motto, puts us in mind of the remark made apropos of the idea being broached the good whisky could be distilled from the fruit of the oak tree, “Tall trees from little acorns grow.”

I have seen some julep strainers with acorn symbol cut-outs.  Perhaps these strainers were premiums offered with Old I. W. Harper?  Bernheim also had an “Old Continental” brand which used the acorn symbol in its advertising as well: 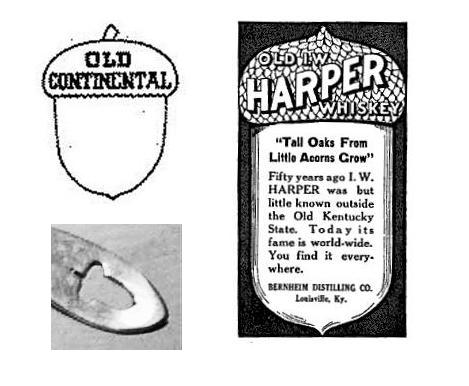 Some trademark and patent information follows.