Posted on December 5, 2013 by queenofsienna

In my last post entitled “Ames, Mead, Smee…The Beginnings of Silverplate in Hartford”, I very briefly mentioned William Hazen Rogers for he partnered with John O. Mead for a short period of time.  This prior post can be found here:

William Hazen Rogers seems to be one of the more important figures in the development of the silver plating industry, particularly in Hartford. Here we will touch on a bit of his earlier involvement leading up to the mass production of flatware etc.  Again, this info is located in this post so that it might form a basis for future reference.  The following is from the Connecticut Historical Society:

In the above, Cowles & Isaacson are noted. See Spoonville link below. I will comment near the end of this post on a few others that might have been learning the process of silver plating in Granby. William may have moved the Cowles operation to the cellar on State St.

Below is from a biography of “F. Willson Rogers”, one of William’s sons.  It is taken from the “Commemorative Biographical Record of Hartford County” by J.H.Beers & Co. 1901:

In the above, Beers states “first to apply for a patent on sectional plate”.  More on “Sectional Plate” later in this post.

Below is the 1828 listing from the Hartford City Directory listing Joseph Church and Rogers.  Of interest, Joseph Church’s son was Frederick E. Church, famous landscape painter.  For more on Joseph Church see:  http://freepages.genealogy.rootsweb.ancestry.com/~silversmiths/makers/silversmiths/47547.htm

The following is taken from Geers 1845-46 Hartford Directory:

Note in the above William’s brothers Asa Rogers – silversmith and Simeon Rogers – Jeweler…each of the three at different Hartford addresses.

Below was taken from an 1844 issue of the Hartford Times showing William Rogers at 4 State St. 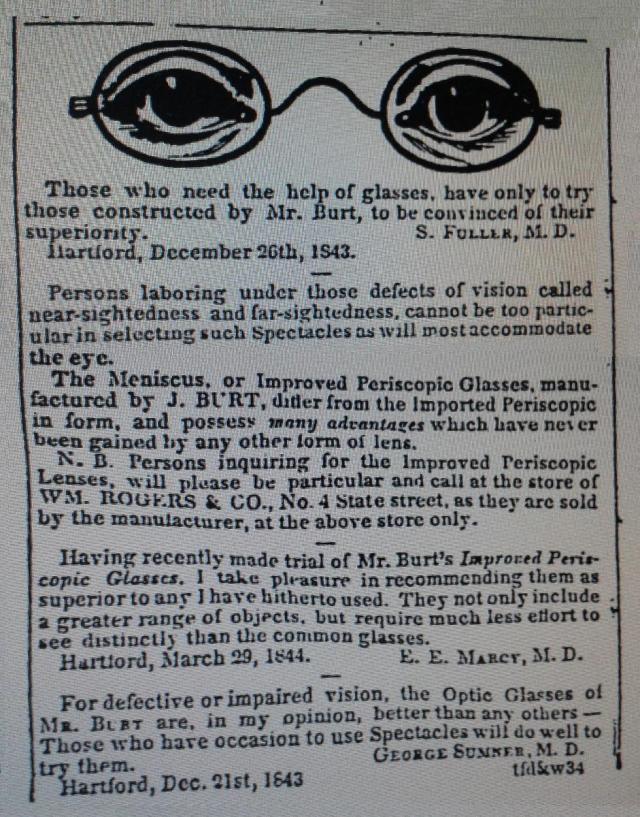 Following was taken from an 1846 billhead:

Note the word “Plated”  as well as S.S. Rogers for Simeon Smith Rogers (one of William’s brothers).

The illustration below shows Rogers Brothers new building at corner of Hicks and Trumbull, built circa 1851. (No. 1 Hicks in the 1861-62 Hartford Directory)

The above was taken from the following 1855 ad: 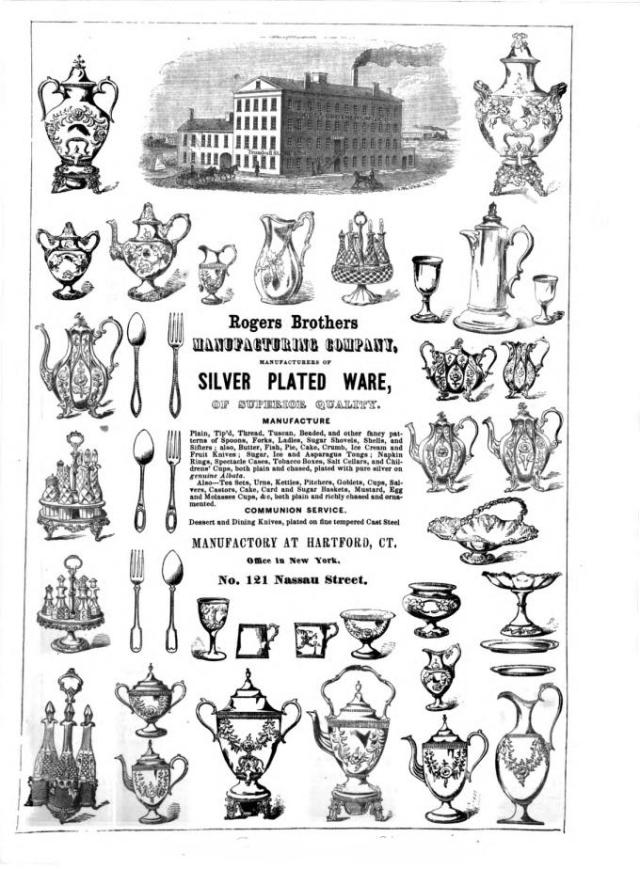 Below shows old map where the new factory location can be found at Trumbull & Hicks.

A brief but well written synopsis:

For more on the life and times of William Hazen Rogers please see:

And now, with regard to the patent for “Sectional Plate” which I had mentioned earlier, it seems to me that I read somewhere that William traveled some distance (perhaps upstate NY) to procure the rights to an invention involving the application of thicker silver at the “wear” locations. If I can find that reference I will add the details here.

In the American Digest article below, his son claims his father was the “original inventor of sectional plate” (line marked in red).

Other of William Hazen Rogers enterprises in Hartford include Rogers, Smith & Co. (1856) and Wm.Rogers Mfg Co.(1865).  These organizations will be investigated in a future post. There are many tangents to pursue due to the intertwined relationships. Later we will look at Hartford Mfg., the Rogers Brothers Family, Wm. Rogers Mfg. Co. and other Hartford concerns and individuals involved in the silver plating industry.

In the Connecticut Historical Society bio at the beginning of this post there is mention of William Cowles & James Isaacson. William Hazen Rogers may have started plating in Hartford after purchasing Cowles Mfg Co.  See my earlier post on Cowles:

James Isaacson seems to have had some knowledge on the subject. He was in Hartford for a time in the 1840’s, as were many others worthy of attention. Below are some hints of the varied early plating activity in Hartford. Among other publications implying connections to “Spoonville” and Wm. Rogers is a snippet from “American Electro-platers Society” that led to the beginning of some research on James Isaacson & William Pratt. So far there is no indication that they were involved with William H. Rogers in Hartford.

Another note of interest, which will be followed up in the next post, is the marriage of Lewis Morgan to a woman from Granby (“Spoonville” is located there). Lewis Morgan was in Hartford making German Silver articles in the early 1850’s for the Rogers Brothers Manufacturing Company. Was he at Cowles in Granby too?

In the next post, I’ll examine the Hartford Manufacturing Company.