Posted on October 3, 2013 by queenofsienna

I was recently contacted by someone who had been researching the mark on the back of a piece of flatware.  The mark was “Conn. S.P. Co.”.  She came across my blog post on Ladies Home Journal silver plated ware offered as premiums.  One of the patterns offered by the Ladies Home Journal was the “Rossmore” pattern.

Although the manufacturer of this silver plate was not identified in the ad, it just so happened that I owned several pieces of this same exact pattern with the back stamp “Conn. S. P. Co.”.  I had researched extensively, yet I could find nothing about this company.  I have also seen this mark as “Conn. Silver P. Co.”  It was one of those mysteries; all you could do was conjecture and keep searching.

So when I was contacted by this individual who was researching “Conn. S. P.”, I asked if the pattern on her flatware were the same as on those that I had, that being the “Rossmore” pattern in the ad.  And she said that hers was different.  It was basically a floral pattern with “THE COW JUMPED” with a cow, moon and dog incorporated within the design beneath those words.

I remembered that when I was researching “Conn. S. P. Co.” I came across a picture of a spoon with this back stamp.  And this spoon had “HEY DIDDLE DIDDLE” on it along with a cat and fiddle.  Luckily I had saved a copy of this image.  The following shows that spoon along side the fork.  They certainly were a match!  The quality of the images are not great but I think you can make them out.

It is believed that this English nursery rhyme dates back to the late 16th Century.  One of the common versions follows:

Hey diddle diddle,
The Cat and the fiddle,
The Cow jumped over the moon.
The little Dog laughed,
To see such sport,
And the Dish ran away with the Spoon. 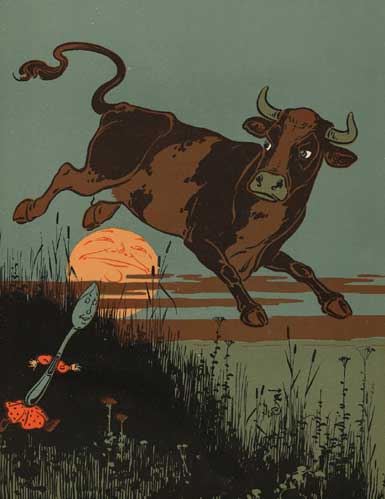 By William Wallace Denslow Circa 1765

There has been a profusion of unsupported explanations of this rhyme over the years (centuries) but most scholarly commentators believe that the verse is probably meant to be simply nonsense. 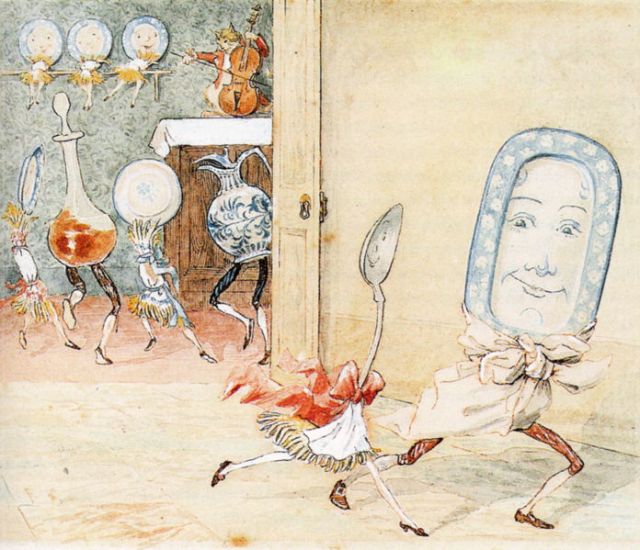 So, we have pieces of what appears to be a child or youth set…a spoon with “Hey Diddle Diddle” and a fork with “The Cow Jumped”.  I’m guessing that there must be a knife out there with “The Dish Ran Away” or something similar featuring dish and spoon images.

Does anyone reading this have any knowledge they would be willing to share on Conn. S. P. Co. and / or this “Hey Diddle Diddle” set?  I’d love to learn more!

I have several pieces of this Conn Silver P. Co. flatware offered for sale at my Etsy shop (a photo of one listing is above).  This pattern is rare and would be a great one to add to your collection.