Posted on November 28, 2012 by queenofsienna

Browsing through the October 21, 1897 issue (Vol. 71, No. 42) of the Youth’s Companion publication, I was taken by the vast selection of premiums offered.  There were optical goods, artists materials, cutlery, cameras, electrical apparatus, all kinds of boxes for gloves, jewelry handkerchiefs, trinkets, et cetera, leather goods, musical instruments, cabinet organs, sewing machines, clocks, writing materials, games, toys, dolls, jewelry, furniture, books, china, hot water bottles, umbrellas, megaphones, hunting and fishing goods….I could go on and on.  For the most part, the manufacturers of these items were unnamed;  I did see Parker pens being offered.  What struck me were two full pages of 1847 Rogers silver and silver plate flatware included in this premium section.

Following are closer views of these pages: 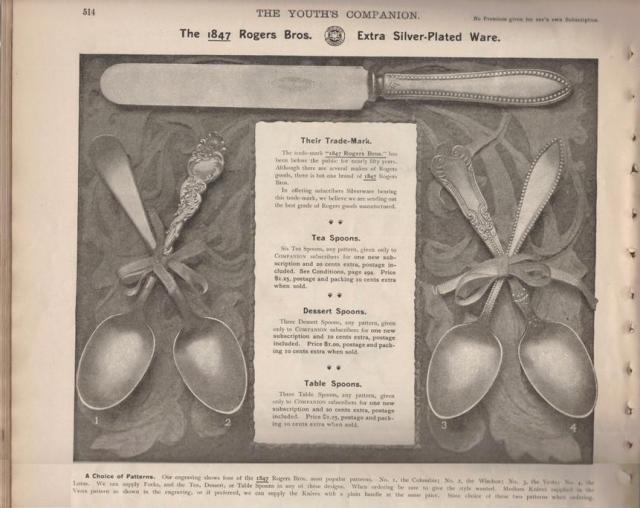 In the photo above, the 1847 trademark is discussed as well as the premium offer detail on tea spoons, dessert spoons and table spoons.  The patterns shown are:  Columbian, Windsor, Vesta and Lotus.  A medium sized knife in the Vesta pattern is shown at the top of this section.  I believe this 1895 Vesta pattern is the only pattern offered as a premium in a medium sized knife; a plain medium sized knife was also available.   I do have eight teaspoons in the Columbian pattern currently for sale at my Etsy shop:  http://www.etsy.com/listing/99208147/eight-rogers-silver-plate-teaspoons-1893

The picture above shows various sets offered as premiums.  The first set is called a “Housekeeper’s Outfit” and includes six tea spoons, six dessert spoons, six tea forks and six tea knives.  I am not aware of 1847 Rogers offering “tea forks” or “tea knives” and this was interesting to me.  I’m going to have to do more research on this.

The close-up above of the “Housekeeper’s Outfit” shows what I believe to be the “Embossed” pattern.  This pattern does not have a corresponding tea knife (note that the photo shows plain knives, not patterned).   Interestingly, this pattern has variations for different flatware pieces.  The image below was taken from Meriden Britannia’s 1886-87 catalog.  You can see the different pattern variations of “Embossed” for the various forks and spoons.  The only other pieces made in this pattern were a sugar shell and a master butter knife.  I have an “Embossed” master butter knife offered for sale at my Etsy shop:  http://www.etsy.com/listing/82120063/1847-rogers-bros-silver-plate-master

Another set shown is a Butter Knife / Sugar Shell combination in the new (in 1897) “Romanesque” pattern (see photo below).  What is particularly interesting to me is the “Companion” souvenir spoon offered toward the bottom of the page.  It was sterling silver, coffee sized (and when they say “coffee sized” it translates to demitasse in today’s language) and had The Youth’s Companion home engraved in the bowl.  I’ll have to keep my eyes open for this one! 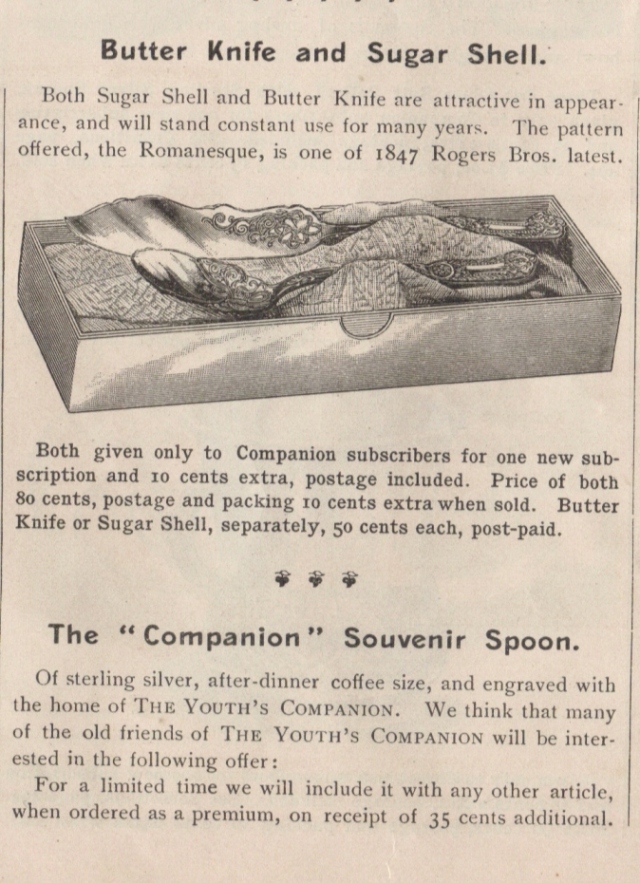 A Child’s Table Set including knife, fork, spoon and napkin ring in the “Romanesque” pattern was also offered (see below).

The top of the second page shows the following: 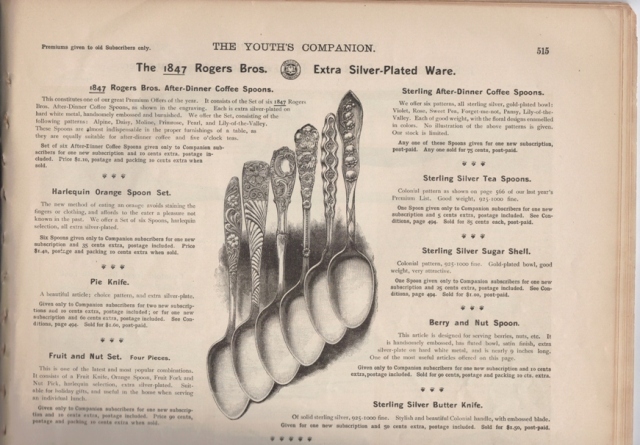 In the photograph above, a gorgeous set of six coffee spoons (see detail below) is offered as well as other items.  In the left column the “Harlequin Orange Spoon Set” is mentioned.  I have a post entitled “The Eating of the Orange…Dainty Devices for the Proper Eating of this Delicious and Seasonable Fruit” which was taken from an 1894 issue of the Jewelers Circular (https://queenofsienna.wordpress.com/2012/08/20/the-eating-of-the-orange/ ) discussing many of the companies and products being advertised for the proper eating of the orange!  On the right side of this photo you’ll see that sterling silver premiums were also available.  The sterling silver coffee spoons with the gold plated bowl in the Violet, Rose, Sweet Pea, Forget-me-not, Pansy and Lily-of-the-Valley patterns sound magnificent!

The picture above shows those six silverplated coffee spoons shown above in greater detail.  From top to bottom the patterns are:  Alpine, Daisy, Moline, Primrose, Pearl and Lily-of-the-Valley.  All are 1892 patterns except for Moline which is an 1893 pattern. 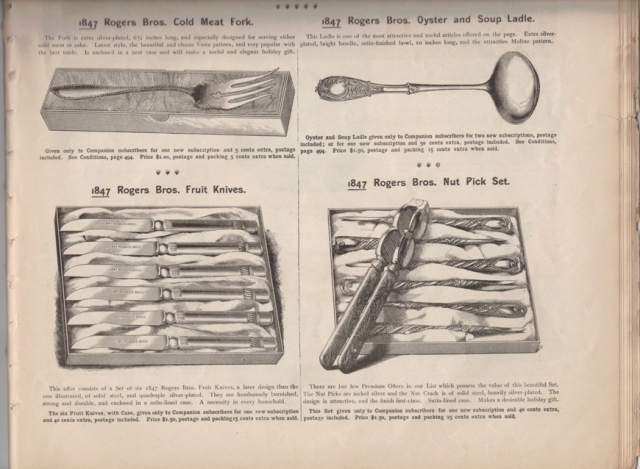 The photo above shows a fruit knife set as well as a nut pick set. 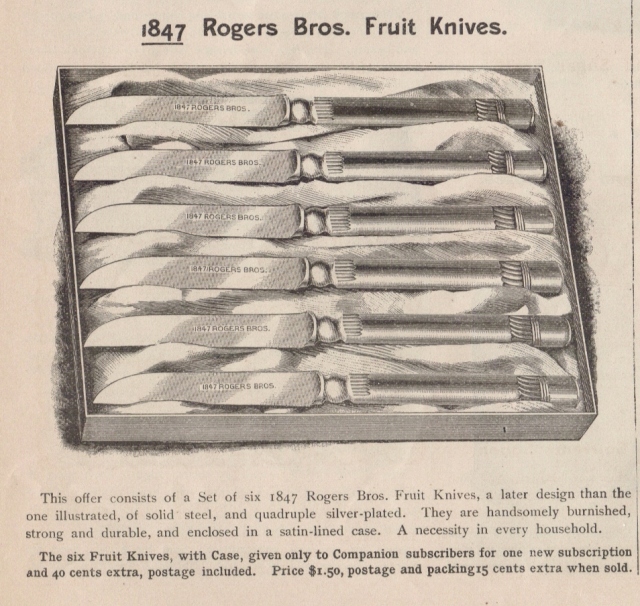 In the above detail of the fruit knives it is mentioned that “a later design than the one illustrated” will be provided.  The design illustrated was included in the 1886-87 Meriden Britannia catalog but unnamed, just shown as No. 32.  Also shown in this catalog is a separate design (No. 5) for a nut cracker in this same pattern.  But what is also interesting about this ribbed design of No. 32 was that the “Arabesque” pattern was offered with this same banded ribbing.  See the two knives in the center of the illustration below as well as the nut crack:

I found the same unnamed rib design pattern on page 202 of “American Silver Flatware” by Noel D. Turner and it was shown as part of a Fruit and Nut set.  I believe this unnamed pattern was only used on fruit knives, nut picks and nut crackers and as a base for the “Arabesque” pattern fruit knife.

The following info was taken from Wikepedia:

“The Youth’s Companion (1827–1929), known in later years as simply The Companion—For All the Family, was an American children’s magazine that existed for over one hundred years until it finally merged with The American Boy in 1929. The Companion was published in Boston, Massachusetts by the Perry Mason Company (later renamed “Perry Mason & Co.” after the founder died). From 1892 to 1915 it was based in the Youth’s Companion Building, which is now on the National Register of Historic Places.

“In the 1890s its content was recentered around entertainment, and it began to target adults as well as children with pieces contributed by writers such as Harriet Beecher Stowe, Mark Twain, Emily Dickinson, Booker T. Washington, and Jack London. Another innovation was a medical column for older readers. In consequence, its circulation increased one-hundredfold, with sales peaking in 1893. It was advertised in 1897 as “an Illustrated Family Paper”, having, as one person said of it, done “away with childish things”. It did, however, retain a children’s section, which included short poems and puzzles, and in faith to its beginnings, however, The Youth’s Companion did not mention nor advertise drugs or alcohol, nor did it delve much into politics; when it did, it usually did so in a humorous way.

“Erle Stanley Gardner (1889–1970) was, as a child, very fond of the magazine. When he embarked on his own writing career, Gardner borrowed the name “Perry Mason” for his famous fictional attorney-detective.“

The research on this subject is a work in progress and this post will be updated.  I welcome your comments!