As I might have mentioned in other posts, I love to research the history of items that I list at my Etsy shop.  Usually that research results in a definite identification of the subject of the search.  In other cases, however, although much information has been unearthed, a definite identification remains elusive.  Such is the case with a silver plate spoon marked “Mothers.” on the back. There is no makers mark. The handle of the spoon has a sheaf of wheat and a sickle at the top with oats gracefully depicted down the handle. The back of the handle, too, is beautifully decorated. 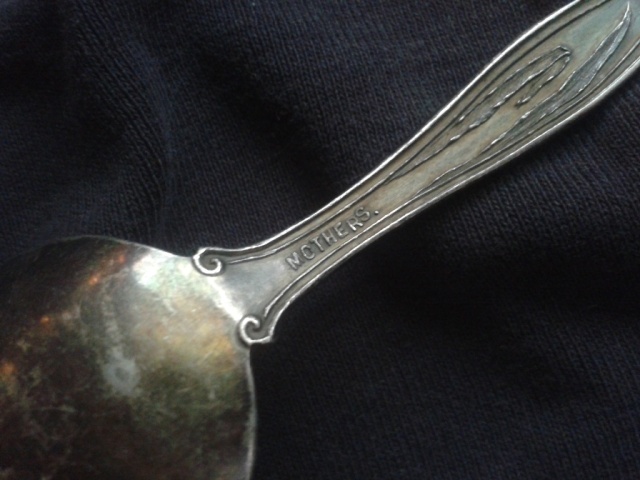 Close-up of “Mothers.” Mark on Spoon

Back of Spoon Marked “Mothers.” 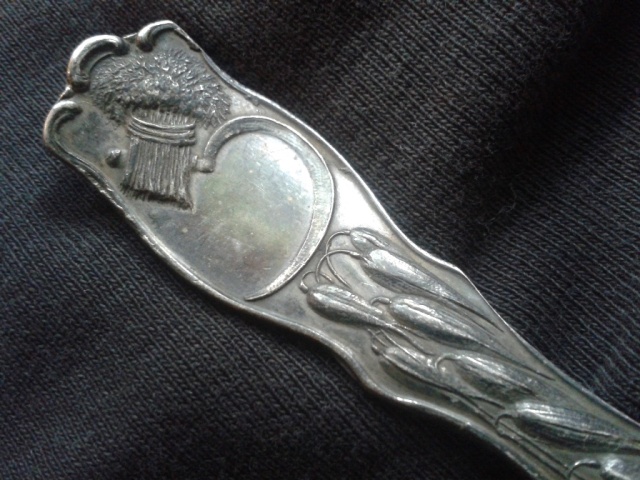 I have not been able to find another spoon like this on the internet.  I believe this most likely was a “Mother’s” Oats or “Mother’s” Cereal premium spoon.

UPDATE 2/3/15:  Since writing the original post in 2012, I have come across other of these Mother’s spoons.  In fact, I have also found an ad for this spoon offered as a premium by Mother’s Oats, Chicago, in the January 17, 1912 issue of the Carroll Herald.  I took my documentation and timeline included below only to 1911.  This ad is the missing link!

I believe this is a relevent abbreviated timeline of the information which I have found:

* 1884: Seiberling President of Akron Milling.  (Note:  According to a very informative website http://www.americanantiquarian.org/Exhibitions/Food/cereal.htm Akron Milling Company, AMC Perfect Cereals, was in business from 1870-1900).  Did Seiberling take the “Mothers” logo with him?

* 1885: Pamphlet published “The AMC Perfect Cereals: What To Buy And How To Use Cereals”.  The description of this pamphlet, as taken from the Michigan State University Libraries  Special Collections, http://www.lib.msu.edu/exhibits/sliker/detail.jsp?id=5993 follows:

“The cream-colored front cover of this pamphlet has a large color lithograph by M. M. & O. Lith, N.Y, of a scantily clad young girl holding a grain sickle and bundle of wheat with one hand above her eyes as if she is trying to look in the far distance. She is standing in a garden of vines. In the upper left corner is a red triangle with The AMC Perfect Cereals in cream print. In the bottom of the drawing is What To Buy And How To Use Cereals in cream print. The back cover has the AMC Perfect Flour triangle logo above a promotion for the flour, followed by directions for making the perfect bread. The first page has the author’s name (Thomas J. Murrey) and credentials, the publisher (The Akron Milling Company, Akron, O.) and the agent (James B. Whitaker & Co., New England Agents, No. 174 State Street, Boston). The following pages have information on farinaceous food products, The Akron Milling Company and an introduction which tells that “this excellent work” will greatly benefit the housewife “or she will be behind the times and know but little of the wonders that have been created in the Cereal world.” Recipes are in paragraph format and use rolled oats, farina, wheat, hominy grits, barley and Indian meal [corn meal]. There’s even a recipe for gruel. Every other page is a color illustration of a box of each of the cereal products from the Akron Milling Company.”

The “scantily clad young girl” on the cover of this pamphlet is described as holding “a grain sickle and bundle of wheat”…could this be another link to the similar image of sickle and wheat on my spoon?

* 1895: Akron Cereal Company uses the term “Mother’s” (Mother’s with an apostrophe) in an ad for Wheat Wafers.  This original ad is currently being offered for sale on eBay: http://www.ebay.com/itm/1895-Ad-Mothers-Wheat-Wafers-Breakfast-Akron-Cereal-Co-ORIGINAL-ADVERTISING-/370654617102?

* 1900: Akron Cereal Company ad for Mother’s Oats does not include illustration of oats as depicted on the spoon.

* 1902: Mother’s Oats ad for Great Western Cereal Company shows illustration of oats very similar to the ones on the handle of this spoon.

* Circa 1902:  An advertising brochure shows “Mother’s Oats” (with an apostrophe) on one side and “Mothers Oats” (without the apostrophe) on the reverse side.  I had considered the possibility that these were two separate trademarks used by two separate companies in order to explain the apostrophe or lack there of.  However, now I felt confident that this was just a typographical error.   Note:  This brochure is currently offered for sale on eBay.

What is especially interesting in the above ad is the “Offer Extraordinary” of “Our New ‘Mother’s Spoon” the “Orient” pattern double silver-plated teaspoons.  This pattern was designed and patented by William A. Jameson of Niagara Falls, NY on February 12, 1901; the pattern was not assigned to any person or company.  However, this pattern was later offered by Wm. A. Rogers as “Warwick”.  And if this was the “new” spoon being offered by Mother’s, was my spoon the “old” version?  If Wm. A. Rogers did manufacture the “new” spoon, did they also manufacture the prior version?

* Circa 1904:  Another advertising brochure similar in format to that above is produced.    This time, however, there is no apostrophe in the word “Mothers” on either side, indicating the error had been corrected and the proper spelling was “Mothers”.  Note:  This brochure is also currently for sale on eBay:

So the question is, which came first, the spoon or the box? We know Quaker Oats was offering premium spoons in 1902. Was that in response to an earlier offer made by Akron Cereal Company in the form of this spoon? In Akron’s absorbtion by Great Western did Great Western decided to use the imagery on the spoon on their box?  My conclusion is that the spoon came first.  Like the sickle and wheat sheath on the early Akron Milling booklet when Seiberling was President of this organization, it is easy to assume that this was his design concept and more than likely Seiberling also had the spoons produced for Seiberling Milling.  Along with the Mothers name, the design continued with Akron Cereal after they acquired Seiberling Milling.

This was an interesting story to research…there were court cases involving lost inventory in a warehouse. Maybe the spoons?  Where have they all gone?

If any one has additional information on this spoon or the contents of this post, I’d love to hear your comments!

This spoon can be found at my Etsy shop here:  http://www.etsy.com/listing/105823134/silver-plate-mothers-oats-cereal-premium